Most entrepreneurs care about the company they’ve built and this often impacts their decisions to sell. These concerns include their people, their legacy and what life will be like after they sell, whether they stay on or leave the business when they sell. We conducted the Entrepreneur Exit Report – Selling Your Company Survey and found that among the top concerns for their company post-sale, there were a few patterns. According to the entrepreneurs surveyed, their largest concerns (those that said their concern was Moderate to High) were the following: 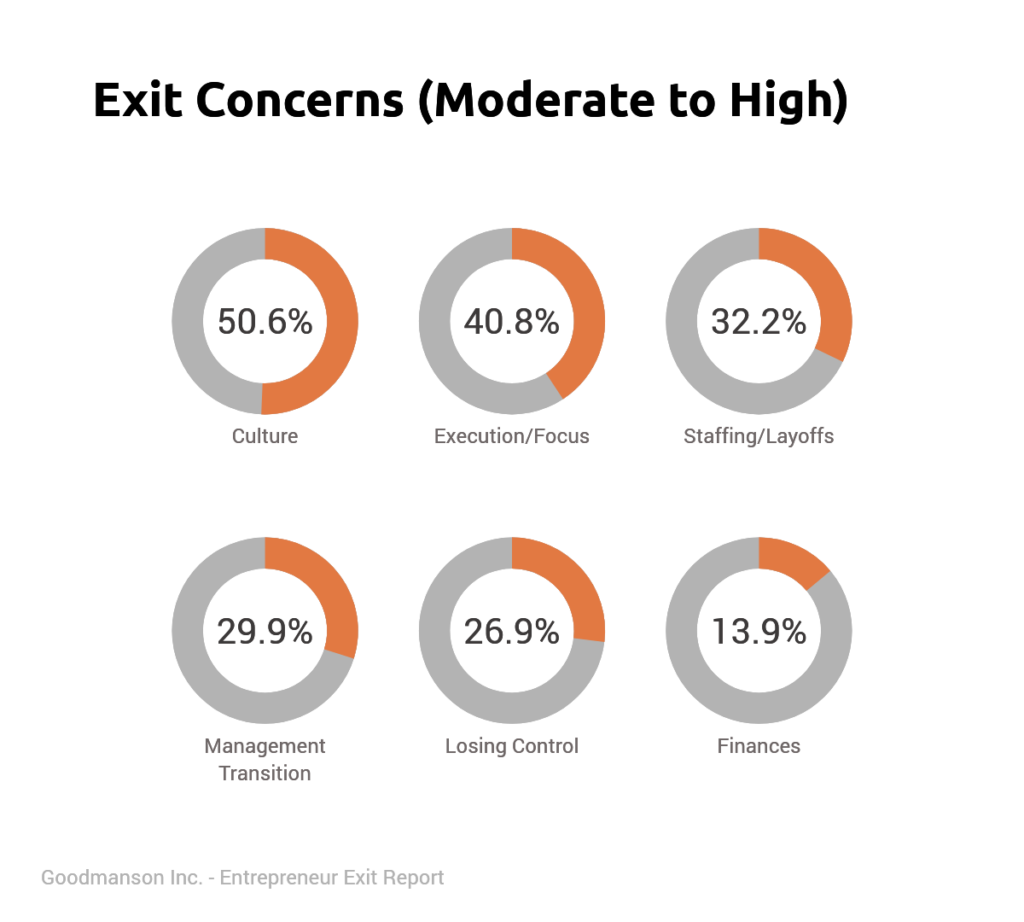 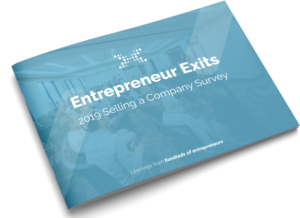 Company culture is the heart of your company, guiding every decision you make – from daily operations to which employees you hire. What’s more, it’s a large contributor to why your company fails or succeeds. As a result, it’s natural that preserving culture is a major concern when selling the business.

Many sellers are nagged by this worry, yet they don’t assess it seriously when selecting a deal. Divides in company culture can create misalignment and struggle in the future. It’s best to examine common values, behaviors and other relevant cultural information when considering potential deals. Further, take the time to build the case as to why a buyer would want to capitalize on your cultural competitive advantage is important. When you put these items into the equation, you can feel more confident about the culture being preserved after the sales transaction.

Struggles with executive team and focus

You worked hard to build your company, and in many cases you’re just as invested in securing the best deal as in ensuring that your company will thrive in the future. This often weighs heavily on the entrepreneur and the executive team as they consider life after selling.

For instance, what are the goals of the future buyer? Are they planning aggressive growth? If so, are your managers “plug and play” in this scenario? Or would the target growth rate push them past their capabilities, creating a rift in your company? The executive team might be fine meeting expectations, but if they aren’t, it’s critical to identify that early. You can even recruit key management players pre-sale who would meet the potential buyer’s goals to ensure that the executive team can meet the buyer’s focus. Creating alignment on the goals and expectations prior to the deal closing is essential for the leadership and often key to achieving deal terms like earn-outs or hold-backs for the seller.

Concerns regarding staffing issues and layoffs

Most entrepreneurs have carefully created a team that has helped their company become successful, and naturally, they’re protective of employees. They might feel bad about selling a company only to have their valued employees laid off in the future.

Understanding potential buyers’ strategies is critical to easing this worry. Companies typically lay off employees for a couple of major reasons. The first is to reduce staffing costs. They might plan to outsource tasks or reduce redundant tasks. Or a buyer might plan expansion of one department and reduction in another. As a result, personnel need to be laid off to accommodate the growing department. Timing and setting honest expectations when or if people will lose jobs is critical to the morale of employees. The buyer and seller should work together on this plan, sadly several sellers I’ve seen play ignorant and act shocked when layoffs occur post-sale.

Of course in some cases there might be new goals or business plans that require ramping-up to increase productivity. In these cases, the sale of the company will result in the opposite of layoffs: hiring. The key is to understand the future goals of the buyer and how these match with existing staff. (Suggested reading: What Entrepreneurs need to know about Selling to a Private Equity Firm)

Losing control of the company

Entrepreneurs know that selling a company involves giving up control, but it’s not that easy when the deal requires you to stay on board after the sale. For example, a high-dollar-value deal might require you to stay on for two to three years after the sale. It might be in a full-time, part-time or consultative role. First of all, decide beforehand if you’re open to this arrangement, because it can bring up the worries about loss of control. And if it’s workable, create some guidelines.

Maybe you’re open to staying on in a consultative role but not in the day-to-day operations. Perhaps you’re only willing to consult on key matters during the transaction period. Set those limits ahead of time so you’re not in the position of wanting to make decisions but feeling powerless to do so. This story should be clear and established from the onset to avoid missed expectations and ensuring a deal closes.

Moving ahead with greater peace of mind

Securing the highest sale price is a key goal in any business sale. But when you shed light on your biggest worries, you can uncover some of the hidden goals for a sale. For example, by outlining your non-negotiables in the deal (i.e., not being open to staying on after the sale due to a strong feeling of losing control) – you can move forward more effectively. You will have greater peace of mind knowing that worries won’t interfere with the sale and adversely affect the deal. Additionally, the result for management, employees and prospective buyers will also be more favorable.

Want to learn more? Check out our Exit Strategies and Research to learn about the right exit strategy for your business. Or grab the Valuation Playbook to maximize the value of your company prior to exit. 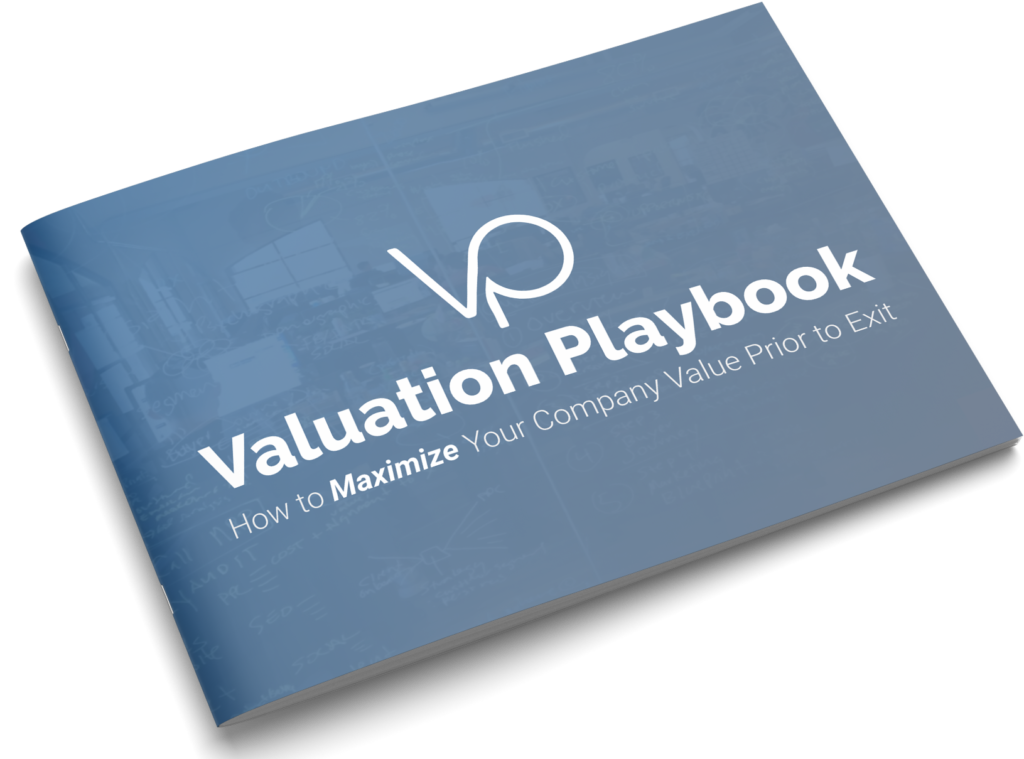 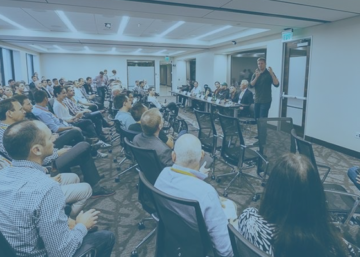 150+ Entrepreneurs share their Best Advice on Selling a Company
What Entrepreneurs need to know about using an Investment Banker or Business BrokerDrew GoodmansonMay 13, 2019March 16, 2020 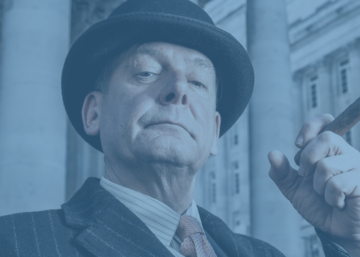 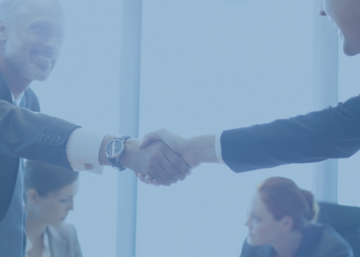