Preparation begins now to separate the winners from losers Post-Covid

Even if you survive this downturn, companies who do not become aggressive, adaptive and opportunistic may never recover. This is the lesson I learned in the 2008 downturn. After the dust settles, there will be a couple winners, but a lot more losers.

Yes, I know there will be differences from Covid-19, but in the 2008 downturn, our company emerged to became one of the Fastest Growing Companies in our market and then on the Inc. 500/5000 list. Later, we became part of the leadership team that consolidated our market that sold for $1.5 Billion which had started with a company doing in the low millions of revenue, which went on to be the Large Cap Private Equity Deal of the Year.

On the flip side, we saw some of our competitors survive, but many never fully recovered to the companies they once were. It was as if a company played it ‘safe’ or to ‘not lose’ it greatly increased their odds of failure. It was the companies that became aggressive, made adaptations and became opportunistic that won.

So what did we do?

After our survival planning (which was intense scenario planning and making extremely tough decisions that needed to come first), we immediately began working on the new realities that we saw coming. Here are a couple of the moves we made:

1. Our Pricing Changed: Our company offered high-end custom web development work all the way down to a SAAS product. Prior to the crash we were 50/50 in revenue breakdown. After the crash, people who used to spend $20-50k were now only willing to spend $12k, people who spent 10-20k were looking to spend closer to $5k and those who were $5k now only wanted to spend less than $2k. We successfully mapped this plan out through a Customer Value Mapping process to identify how to better package our offering and laser focus on this value. We even identified adjacent value we were already creating and/or could add that was profitable that allowed us to Expand our Revenue.

2. Our Economic Model Change: Two things happened after the downturn, we accelerated our dependency away from project based revenue and we needed to become profitable on less revenue per client. In terms of predictability, scaling and value, rather than grow project-based revenue we shifted quickly and heavily invested in our SAAS offering. Within a couple years we moved from 50% to 70% SAAS, and we tech enabled our custom offering to a ‘tailored’ solution which became 15% of our revenue so we became even more profitable on these and less dependent on project work and it we were able to price based on value we created not the time we spent on it. Tech Enablement became the way forward in many of the areas we worked, from operations, customer service, sales to marketing automation and lead nurturing. Our economic model shifted and we became a much healthier business.

3. Our Marketing Changed: In a lean time, we could no longer make assumptions and spend money without a clear ROI, so we doubled-down on the connection with our customers. We began an ongoing Voice of Customer monthly meetings to hear from Sales, Marketing, Customer Service and all customer-facing employees what they were hearing. We began an annual Customer Development process of Discovery Calls to customers, prospects and our market. From these calls we did Market Surveys validating the assumptions and learnings from our phone calls to ensure what we built was rooted in the value the market wanted. We re-oriented our entire marketing plan to align to how our customers bought and adjusted our pricing based on the data from the surveys. This included segmenting our market based on size and other demographics and building out 3 Buying Personas (Economic, User and Technical Buyers) because the decision process was rarely one person. Looking at these new realities, we identified our Ideal Customer Profile, the segment of the market we knew we could win and laser focused on them, while being opportunistic if other segments bought from us. We were early adopters of Marketing Automation and built nurturing sequences which eventually got us to a place where most of our deals were Leads we qualified and nurtured for months prior to them closing. This, our CRM and implementing tracking on all our marketing channels allowed us to better understand where to invest our marketing spend to get a ROI. All this tracking let us continue to adapt, refine and improve our performance.

4. Our Sales Changed: Most of our sales became SAAS-clients and we no longer needed professional sales people for these clients, so, we moved a Customer Service person into a role to help them buy, and this role became our number one salesperson. For larger deals, the User Buyer typically was tasked by the Economic Buyer to gather the information and make a recommendation on a solution. While the User Buyer presents themself as the decision maker, in the past we had a ‘verbal’ that we had won the deal, only to find out we didn’t close it. This could no longer happen, so we built the resources and plan to arm the User Buyer with tools to engage the Economic Buyer in the buying process. We built a consultative process for clients that began with a free analysis and then to a low cost process to help them map out the scope of their needs based on what the User and Economic Buyers would want. This process had a nearly 100% close rate if they did the scoping process. Again we became laser focused on where we could win (intentional), where in the past we were much more opportunistic, taking the deals that came to us.

5. Opportunistic M&A: After these improvements, we joined in a Private Equity-backed Market Consolidation where our company merged 10 others under us into a business unit and I became part of a leadership group that bought over 40 companies that sold for $1.5 Billion. This experience became the Large Cap Private Equity Deal of the Year.

After you do your survival planning, what type of company will you want to emerge from this crisis? 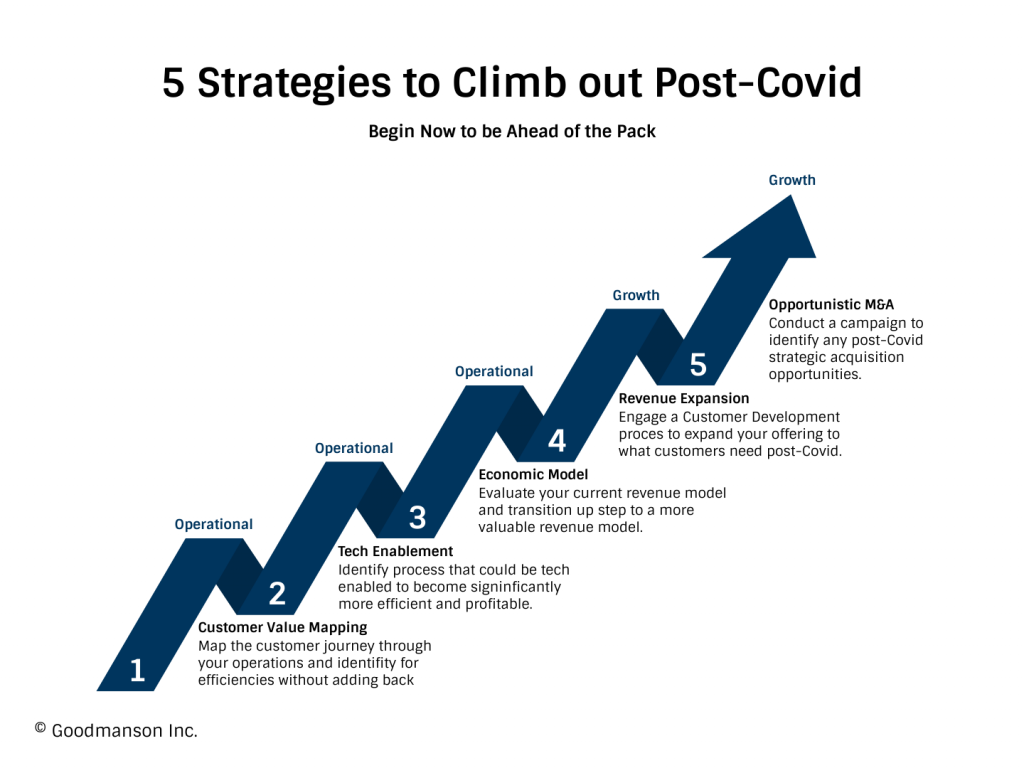 Like you these last couple weeks has been an absolute scramble to wrap my head around the new reality for many of our clients. While there are some that are being hit hard, others will be impacted but can use this time to prepare to come back even stronger.

For example, through the Customer Value Mapping we have identified for several clients value they give away that could be added as a revenue source. We are evaluating the slowdown to help a company transition from services for work performed revenue model to a tech-enabled retainer revenue model. We are conducting several Customer Development projects to expand revenue for companies based on adjacency value they could add to their current customers. Lastly, we are seeing some opportunistic M&A that could land a game-changing strategic acquisition for clients.

In light of these events, we are adapting our Valuation Playbook to help companies emerge even stronger.

If you are a CEO and want to talk through any of these, happy to discuss how you could use any of these to come back stronger. We are passionate about helping businesses and know you are the visionaries and risk-takers who will help the entire economy recover after we get through this Covid storm.  Contact us if you’d like to learn more.

RELATED POSTS
3 Lessons I learned from Winning Millions from Casinos as part of a Professional Card Counting TeamDrew GoodmansonNovember 5, 2018April 30, 2019 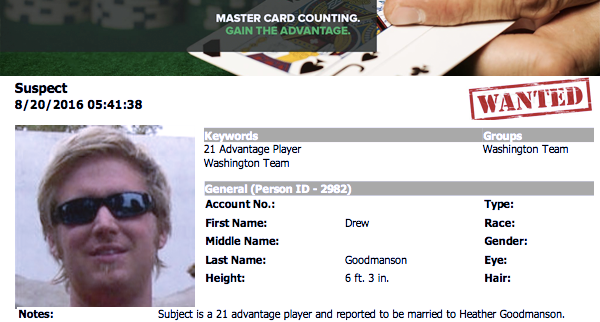 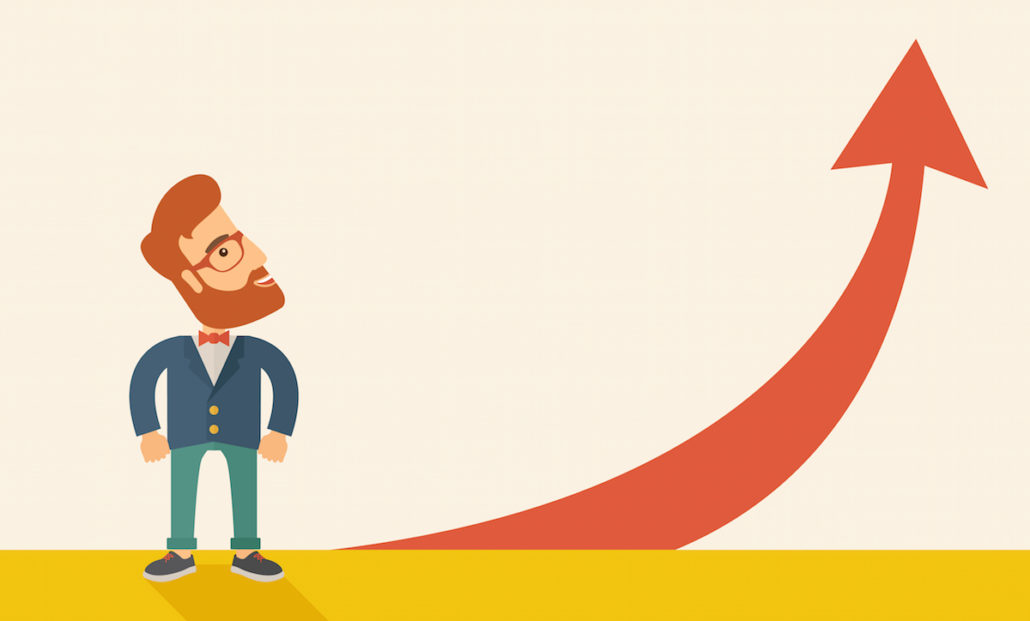