I posted an article in 2006 entitled, Preaching the Gospel to Yourself.  This article spoke about what I was learning regarding seeing the ‘sin beneath the sin’ and exposing the idols of our hearts.  This gospel preaching stated that often we can go after the symptoms of sin (eg. anxiety) but miss the powerful idol that causes these sins to surface in all sorts of ways (eg. the idol of seeking other people’s approval).  Since then (at least based on a Google search on preaching the ‘gospel to yourself’) tons of articles now appear that were written on this topic, including books being written. Preaching the Gospel to yourself has become a more common term used by Christians. In fact, in ours and many communities, ‘gospeling’ has become a verb that we remind one-another this freeing news of how Christ lived for us and allows us to ‘go up the slope of faith’ rather than be enslaved to idols.
But, what happens when after “preaching the gospel” to yourself, you find patterns of sin deeply embedded in your personality that causes you to feel frustrated that change is not happening?  In my journey, seeking to deal with these idols, I’ve felt I haven’t had the transformation I’d hoped.  Often some idols seem so deeply embedded that we think, “they are part of who I am”.
Why is this?  Based on recent experience, for some idols that drive our heart, often when we were young, identity-level formation takes place based on sin and becomes woven into us.  (Often it occurs between the ages of 5-8 when our belief systems are being established consciously and unconsciously.)   Typically, because of a sinful situation where we felt wounded, we make a vow that  becomes an idol that opens up a stronghold in our life.
Let me give you an example:

Let’s say you are raised in a home where your parents separate and while living with your mother a new man enters the home and abuses you emotionally.  These series of events create a turbulent environment and at this moment, in your heart you say, “I would never let my children experience something like this.”  Now, this wound is like a muscle knot in your back, as you grip onto this vow tightly, you lock-up and your whole body adjusts to this vow.  Even something ‘good’ as protection in your own hands becomes a powerful idol that enslaves you to “make sure you have control in your life to save you from chaos.”  As you grow up, you have children and become overprotective out of this ‘good’ desire for your children, but ultimately smother them with fear-based parenting.

As I’ve seen and heard others who’ve gone through this process of identifying these wounds/vows, it can take hours to navigate this discovery process in prayer asking the Holy Spirit to reveal to you where it came from and subsequently months to unpack.  In all circumstances (for me at least), it has led to a specific childhood memory (wound) that was a powerful shaping event in establishing this false identity and idol in your heart.  This requires seeing the wound beneath the idol, beneath the sin.

For example, let’s say you were wounded because you were put in a threatening situation and felt unprotected by your father (remarkable how most of the issues involve fathers) and so you make a vow in your heart to not let this happen again and seek control.  So because of this lack of control when you were a child you now have an idol of control that causes you to be angry when things aren’t in your control. 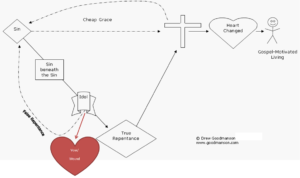 For these recurring idol struggles, I am suggesting we need to add a layer deeper to the earlier post I referenced.  I am also learning that things tend to get worse  before they get better.  It can feel like sin is happening more often when you began to realize these wounds. I believe this is because you will go from being unconscious to conscious in an area that once was ‘just part of who we were.’  So, from the example above, we go from unconsciously angry to consciously angry when we realize the wound and in this moment need to apply the gospel and re-form our identity in Christ.   All of this is very difficult work and requires a vulnerability with others that is scary.  I am learning as we seek to understand where our powerful idols form that they have caused me to live out of lies of who I am versus my true identity in Christ.  As we go through this and recall these wounds, a helpful question we are asking is; “where was Jesus in this moment?” when we were wounded.  In this we seek to see Christ and  re-consider these circumstances in light of who He is and who we are in Him.

Shift from working IN to ON your company
Building a Culture of EngagementDrew GoodmansonMay 29, 2014May 29, 2014

Building a Culture of Engagement
The Biggest Mistake I made launching Missional CommunitiesDrew GoodmansonAugust 29, 2013August 29, 2013

The Biggest Mistake I made launching Missional Communities